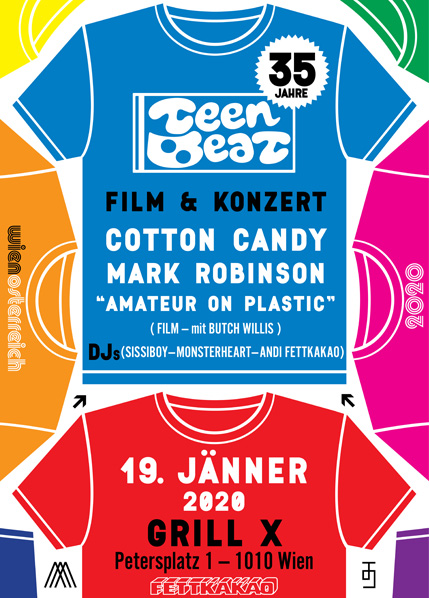 We are Celebrating 35 years of Teen-Beat with live appearances by Cotton Candy, Mark Robinson and a screening of Amateur On Plastic, a documentary about Washington, D.C.-area musician Butch Willis and his band the Rocks.

+++ COTTON CANDY (Live!)
Cotton Candy is Mark Robinson (from the bands UNREST, AIR MIAMI, GRENADINE, FLIN FLON) and Evelyn Hurley (BLAST OFF COUNTRY STYLE). The album has 27 tracks! It is a potpourri of genrés – from indie-pop to electronic-pop to hard rock. They also show off their advertising jingle chops with covers of rare radio and TV commercials. They were in Believer Magazine’s 2009 Music Issue and collaborated with DAVID SHRIGLEY on Tomlab’s “Worried Noodles” collection. The title track is used in a Radio Shack commercial. Mark and Evelyn also run the Teen-Beat label. Brightest Young Things said “Cotton Candy was absolutely the highlight of the night for me.”

++ AMATEUR ON PLASTIC (Film)
Butch Willis is a Washington, D.C. rock legend. Born and raised in 1960s suburban Maryland, Byron Henry “Butch” Willis came of age in the late ’70s post-hippie subculture. After sharing an apartment with infamous local music icon Root Boy Slim, Butch was inspired to become a rock’n’roll star himself.
The unique and unusual brand of “outsider music” that Butch Willis & The Rocks created captivated the local music scene beginning with their appearance at the seminal Primitive Night in 1984. AMATEUR ON PLASTIC chronicles Butch’s life and career from the beginning all the way through to present day. It features a host of Butch-appointed band managers Joe Lee (Joe’s Record Paradise), Jeff Mentges (No Trend), Jeff Krulik (Heavy Metal Parking Lot), and director Mark Robinson (Unrest/Teen-Beat). Also co-starring is Al Breon, the Rocks’ innovative “throat guitarist.” The film combines archival footage, interviews with Butch, and performances of his hit songs “Drugs,” “The Garden’s Outside,” “TV’s From Outer Space,” and “The Girl’s on My Mind.” Stylistically, the film unintentionally hovers between amateurish and avant- garde, much like Butch’s own music and career.
Amateur on Plastic also parallels the 1990’s era of the seminal indie label Teen-Beat. Behind-the-scenes glimpses at the label’s concerts and private parties provide much of the background and feature members of the bands Unrest, Versus, Tuscadero and more.

+ MARK ROBINSON
Mark Robinson is an indie-rock musician from Washington, D.C. who founded Teen-Beat in 1984. Best known for founding Unrest (with Phil Krauth and Tim Moran), he has also been a member of Air Miami, Flin Flon, Grenadine, and currently plays with Evelyn Hurley (Blast Off Country Style) in Cotton Candy and also with D. Trevor Kampmann as Fang Wizard.

He has released a number of solo records. His recordings are typically sparse, often based around a carefully controlled guitar.

His Origami and Urbanism album was released in Germany in 2003 on the Tomlab label.